As an integral part of the facade, sunscreens provide thermal comfort, let natural light in, and help reduce blinding effects without blocking visual contact with the outside, helping bring facades to life.  Sunscreens also create depth – allowing designers to play with shadows while combining thermal comfort, control of sunlight input, and optimization of natural daylight.

Terreal North America offers a range of terracotta baguettes which can be used to build sunscreens, wall claddings, and visual screens in a variety of lengths and cross-sections.

BARRIER AGAINST EXTREME HEAT
Sunscreens cut out a part of solar radiation.  Sunshine is useful in winter for heating a building, but can become a problem in the summer – especially in buildings with large glazed areas.  The rise in the indoor temperature leads to an increased use of air conditioning – a costly and environmentally controversial solution. In summer when the sun is high in the sky, solar radiation is largely blocked by the sunscreen by either reflecting or absorbing it.  A material with a high thermal inertia, terra cotta delays and reduces the re-emission of energy absorbed within it.  Non-transmitted energy does not reach the windows, and does not heat up the interior from a “local greenhouse effect” (a disadvantage with interior sun protection, such as blinds).

OPEN DOOR TO FREE SOLAR ENERGY & LIGHT
In winter, incident solar radiation – produced by a sun low on the horizon – does not suffer from the presence of a sunscreen.  The shade provided is weak due to the spacing between the blades, if installed in traditional orientation on a horizontal blade.  There would then be full benefit from the reduced need for electric heat and light, all without disturbing the effectiveness of the openings normally provided in a building.  A sunscreen allows for the inclusion of larger, more “productive” bays in the design – carefully sized in relation to the orientation of the facade without the downside of overheating in summer. 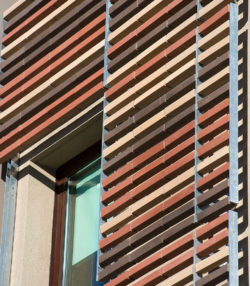 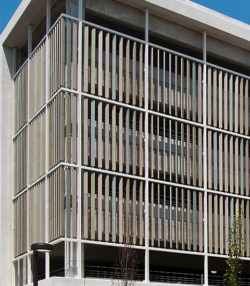 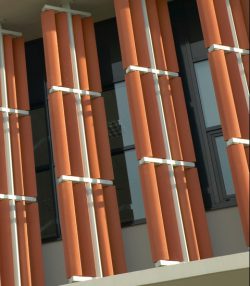 Talk to a Product Expert

Terreal North America’s expert technical team can assist you in choosing the right sunscreen solution for your next project.